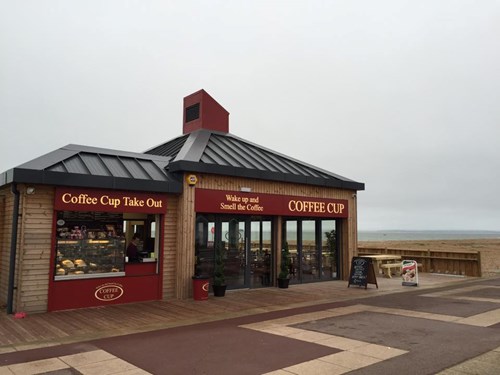 Coffee Cup is a local family run Italian Espresso Coffee business that was established on Eastney Esplanade in 2007 with a small mobile Coffee Kiosk. They recruited their first staff member in 2008. In 2009 the company were approached to open a small Coffee Bar at Clarence Pier and during conversion were again approached by the same company to open a larger Coffee Shop at the other end of the pier. In June 2009 they were the first concession ever to obtain a license to trade from a Coffee Kiosk in Guildhall Square, which opened in December 2009. In 2010 they were approached about building a permanent structure at Eastney Esplanade as part of Portsmouth City Council's seafront strategy - this opened in 2015.

The Coffee Cup specialises in Italian Espresso Coffee, as well as many other hot drinks and a range of food.

The company funding to support the planned growth of the company.

Coffee Cup is a small family run business based in Portsmouth and, after building up a successful trade with a mobile kiosk on Eastney seafront, we decided to take a huge leap and build a coffee house in this location to replace the kiosk. We wanted to ensure that we did not change the offer we had, as we have many loyal regular customers that like to use our Decking Area, or grab a take away coffee and sit in their cars etc. therefore we designed a building that would incorporate a large decked seating area and a takeout window, as well as many new additions, including Bi-Fold Doors on 3 sides of the building to capture the panoramic sea views, a log burner for those cold winter days and a free Children's Area. We have also sought to offer something to our other clientele, including dog bowls and dog treats (as we see many dog walkers) and bike racks for the cyclists that visit us every day. With all this in mind, the design of the building had to be perfect and cost effective as we are a small local company. The grant we received from the Solent LEP helped us to reach our goal and build what we believe will be a fantastic and necessary addition to our seafront for many many years to come.